If You Listen Carefully The Music Is Yours 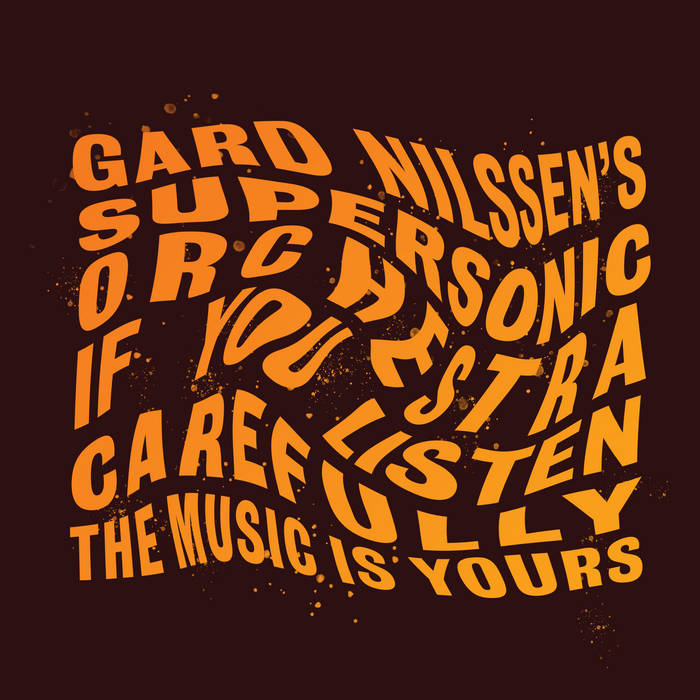 Fasten your seat belt, please. Get ready for the full tilt, barely tamed, beautiful monster that is Gard Nilssen’s sixteen-piece Supersonic Orchestra. Audacious and experimentalist, like everything the Norwegian drummer and composer touches, Supersonic flouts convention and, in particular, realigns the longstanding relationship between pre-composition and improvisation in orchestral jazz. If You Listen Carefully The Music Is Yours, its debut, was recorded live at the adventurous Molde International Jazz Festival in 2019, where Nilssen was Artist in Residence. The band’s uniquely configured, all-star lineup features three drummers, three double bassists and ten horn players, most of them saxophonists. It is a big band, Jim, but not as we know it.

Extraordinarily prolific, Nilssen has since 2007 recorded over seventy albums, most of them with small groups such as the trios Acoustic Unity, Bushman’s Revenge and Amgala Temple. A handful have been made with big bands: three with the acclaimed Trondheim Jazz Orchestra (Happy Endlings, Savages and Lion), one with Zanussi Thirteen (Live).

Nilssen started playing drums practically before he was able to talk, and despite the dominance of small groups in his discography, his formative listening and performing experiences were with larger ensembles.

“I began drumming when I was two,” says Nilssen. “My father, grandfather, uncle and two cousins played drums. There were drums everywhere. It was a jazz-loving family and I grew up listening to the classic big-band format with Count Basie. I’ve always loved the sound of a big band.” Jo Jones, drummer with the Basie orchestra from 1934 – 1948, is still one of Nilssen’s favourite musicians.

“When I was eight,” says Nilssen, “I started playing in a marching band in my hometown [the seaport Skien], along with my best friend, the trumpeter Thomas Johansson [a member of Supersonic]. Later, when we were teenagers, we also played in a couple of big bands, one at high school and another in town.”

Nilssen is attracted by the scale of instrumental combinations offered by extended lineups. “You can get so many different sounds and textures and constellations inside a big band, it’s practically infinite,” he says. “And if the musicians are as fantastic as those in Supersonic, your arrangements can be dynamic rather than rigid - the music can be wilder and more spontaneous than is standard in big bands. In Supersonic there is plenty of room for the musicians to improvise and be free in the music. That is what we’re best at after all.”

Nilssen composed and arranged If You Listen Carefully The Music Is Yours with Acoustic Unity’s saxophonist, André Roligheten. “André is a genius,” says Nilssen. “He took this project to another level. Making music with him is always pure pleasure.” Nilssen and Roligheten’s approach is sweepingly original but there are reminders, conscious or otherwise, of jazz history within it. The album opens with a feral uproar in which Sun Ra-esque space chords punctuate free-blowing ensemble eruptions, twin devices Ra used to kick off Arkestra performances. Later there are echoes of the eighteen-piece band John Coltrane put together for 1961’s Africa/Brass and with Charles Mingus’ mid-sized Jazz Workshop ensembles: the tumult generated by those lineups is mirrored by Supersonic’s horn section, in which reed instruments, in a reversal of big-band convention, decisively outnumber brass.

If You Listen Carefully The Music Is Yours shifts between carefully scored orchestral passages and looser small-group breakouts, between collective hullaballoo and intimate dialogue, between dissonance and melodicism, between passion and reflection. It is shot through with twists and turns. Sixty years ago, The New Yorker magazine’s renowned jazz critic, Whitney Balliett, defined jazz as “the sound of surprise.” Supersonic’s performance overflows with it. Among other modern big bands, perhaps only those led by the Japanese pianist and composer Satoko Fujii deliver the unexpected so satisfyingly.

Supersonic benefits substantially from its scaled-up bass and drum sections, and not simply in terms of volume or traction. “Having three drummers gives each one of us more space to play around the beat,” says Nilssen. “We can go in and out of it, be more creative and add colours to the music. It means Håkon [Johansen], Hans [Hulbækmo] and I don’t have to be timekeepers all the time, which we never wanted to be in the first place. You don’t really need much timekeeping with this band anyay. You just press play and go.” The same broadening of vistas extends to the bass section. (The other big band to use three double basses so effectively in 2019 was the Art Ensemble of Chicago on We Are On The Edge).

If You Listen Carefully The Music Is Yours also carries resonances of music from beyond the American tradition. The album concludes with the storming “Bytta Bort Kua Fikk Fela Igjen,” whose Afrobeat-inflected backstory is winningly foregrounded at various points (most explicitly at 5:00, 11:51, 12:20 and 13:17). Nilssen is a longtime fan of Fela Kuti’s music.

Along the way, the album revisits some of Nilssen and Roligheten’s compositions for Acoustic Unity, with orchestral interpretations of “Bøtteknott,” “Elastic Circle” and “Jack.”

Few things in jazz are as exciting as the sound of a big band in full flight. Supersonic was a sensation at Molde and it deserves to be toured. But economics mean that any further performances are likely to be strictly local. If You Listen Carefully The Music Is Yours, however, makes sixty-six minutes of maybe one-off live magic available to everyone. Remember your seat belt, please.

Bandcamp Daily  your guide to the world of Bandcamp

Featuring Gary Bartz, 5 years of Rhythm Section Intl and an LP of the week by Nicolas Jaar